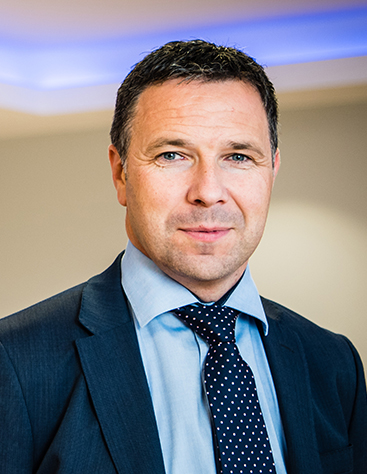 John trained as an engineer and graduated from the University of Ulster, Jordanstown with a BSc Hons in Building Engineering and Management, Built Environment. He subsequently joined the Keystone Group as Technical Manager of Keystone Lintels in 1996 playing a significant role in the development of the business in GB.

Just under 10 years later John was appointed Managing Director of Keylite Roof Windows, taking the helm of a fast growing business. This included managing its innovation pipeline and expansion across Europe for the last 10 years.

John has successfully grown Keylite into the UK’s No.2 Roof Windows brand driven by an uncompromising pursuit of investment in R&D, and delivering ground breaking innovation to continuously add value to the award winning Keylite range.

John’s 20-year career with the Keystone Group and more recently the Keylite company has forged strong relationships across the entire construction trade, and he is renowned for his unrivalled commitment to exceptional customer service.

Keylite Roof Windows was established in Cookstown, Co.Tyrone in 2001, as a subsidiary of the Keystone Group. Today it is the fastest growing roof window manufacturer in Europe and one of the biggest brands in the UK roof windows market. This success is largely a result of a company which has been driven by an ingrained and intuitive spirit of innovation, continuous investment in R&D and a total commitment in putting the customer at the heart of its business. Most recently Keylite was acknowledged by the London Stock Exchange 2016 report as one of the most inspiring companies in Europe.

Renowned for its award winning innovations, Keylite believes in continually adding value to the Keylite Roof Window as standard – a combination of features referred to as Futhertherm, which offers a number of unique patented features in every window, such as the Integrated Expanding Thermal Collar, Flick Fit Brackets, Unique Sash Finger Spring and recessed fit.

Keylite offers a full range of roof windows products, designed for every size and category of building project, an extensive range of genuine Keylite Blinds, as well as roof window accessories including timber loft ladders, flashings and electric operation kits.

The business has over 400 employees across its sites, with offices in Cookstown, N.Ireland, and Swadlincote, South Derbyshire. Keylite’s roof windows are manufactured in Poland. Due to continued expansion Keylite will be moving to a new purpose built 200,000 sq. ft. factory in Zambrow, Poland in 2017.

Quarter 1 demand for roof windows was sluggish, but it seems irrelevant now as we face the biggest challenge our industry has seen in decades.

Roof window manufacturers saw a considerable drop in volume from mid-March until end of April. Only online sales saw real growth as “White Van Man” looked outside their usual supply chain to get materials to finish jobs and keep themselves in work.

Keylite and other Roof Window Manufacturers remained open with warehouse skeleton staff, and SOP, Technical and Aftersales working from home. The last seven weeks gave us time to implement a new Group wide code of conduct and safe operating procedures so our great staff can restart safely and securely.

Roof window manufacturers have the added complication of working to international guidelines which vary as much as our own regional governments, giving staff in Europe different advice and support, and managing logistics across international borders.

Beyond the pandemic, 2020 will be about getting through, and positioning for better times, which unfortunately are 12 months away. I have conflicting thoughts on the RMI sector in 2020. Uncertainty surrounding job retention and the domestic and global economy will weigh on consumer confidence. Homeowners may put off extensions or renovations, and a stalled housing market (what will happen to house prices?) may suggest moving not improving. With question marks over foreign holidays, will homeowners spend on loft conversions instead? I suspect the answer is somewhere in the middle. Where people have the disposable income and spare time at home, we’ll see growth in smaller-ticket improvements such as painting decorating and gardening/landscaping.

As Government tries to get us out of lockdown and back building, housebuilding will be a slow burner. It will be based on completing units sold pre-COVID, and completing units under construction, before a full return based on sales volumes.

Finally, regardless of how you think the government handled this crisis, let’s ensure they remember NHS and other essential workers who put themselves at risk to ensure we got through! Applauding them is a great show of appreciation… but it doesn’t put food on their tables or buy them homes!