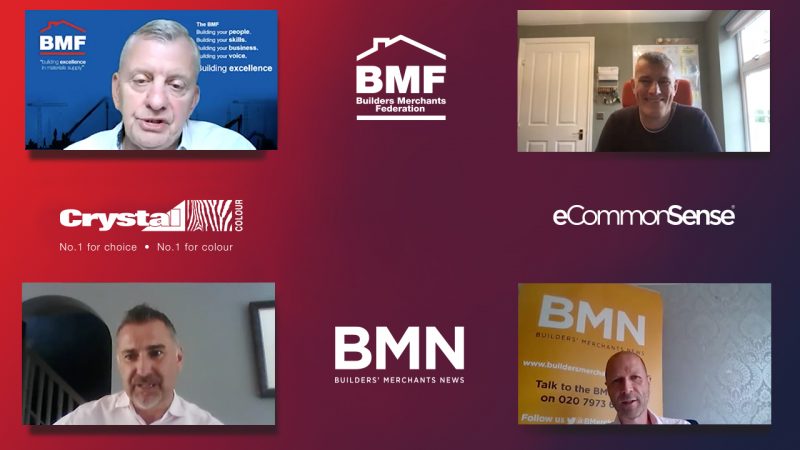 The second in a series of BMBI virtual debates took place on Thursday 8 July and focused on digital and online. Builders’ Merchants News Editor, Tim Wood, summarises what was discussed.

The first question was whether digitalisation is a route to profitability and a sustainable business or a race to the bottom?

Scothern believes there is a long held fear and belief of many builders’ merchants that it is a race to the bottom because by going online, they’re going to be competing with Amazon or Screwfix. He added that eCommonSense clients are reporting margins from online sales at 48%, compared with branch sales of 27%.

Morgan concurred about the fear element, but believes the online presence doesn’t just open up additional revenue streams it offers efficiencies for your business. Far from being a race to the bottom, as a business you’ve got to have a combination of bricks and clicks.

Newcomb said the sector has been quite backward in the area of digitalisation, but things have progressed well over the last 18 months. The most successful merchants are those that offer both the branch and online experience.

He added that there are big costs involved in merchants moving towards digitalisation. “Anybody that’s expecting short term returns will be disappointed, you have to be in it for the long term,” he added. “Those merchants and suppliers that invest heavily in this area will reap the rewards within the industry.”

Newcomb pointed to the performance of the plcs, such as Kingfisher or Travis Perkins, and the brutal fact is that the most successful parts of their business is online digital.

Morgan added that the bricks element of any business is really important as a lot of customers still like to touch and feel things and merchants with showrooms or nice environments are the most forward thinking.

Newcomb believes the most contentious issue is how the manufacturers use that online presence. Do they go direct to the customer, therefore bypassing merchants, or do they still use that traditional route to market? He added: “Merchants are fearful of some suppliers already starting to deal with the likes of Amazon directly. That’s the elephant in the room for me.”

Scothern believes merchants that don’t participate in what is going to be the largest part of the global economy are going to be intermediated and suppliers will say, “you’re ignoring digital so we won’t trade with you”.

The next question was how do you get better customer engagement through digitalisation?

For Scothern it is simply a matter of choice. People have always had choice when communicating be it via phone, fax, face-face, or ecommerce, or how they pay bills through cash, bank transfer, or card, so why should going digital be any different?

The way forward has to be a combination of physical and digital, according to Newcomb, because despite the progress of digitalisation, the industry is full of personalities and people who enjoy face to face contact which is something he hopes “we never lose”.

The next topic was what are the challenges facing the builders’ merchant with the rise of smart systems?

Newcomb disagreed with the word ignorance. “It’s just many SMEs have the short term fire fighting issues that dominate their lives and therefore don’t have a lot of time to sit down and look at the impact of smart systems on their business in ten years’ time,” he said. “We’re in an incredible position right now where merchants cannot match the demand that’s coming in physically through the branches, as well as through digitalisation.”

Newcomb believes that to push digitalisation even further, people have to come into the industry with the necessary skills.

For Scothern, the traditional thinking of the salaries paid to web developers needs to be broken. They are more likely to get paid more than a company director because of the amount of work they can churn out and the demand for them.

“It’s hard for a lot of merchants to stomach the fact that they are going to have to think about paying people £50k, £60k, £70k and then employ several of them to even get in the game. That’s a real cultural challenge,” he added.

Morgan believes merchants don’t want to spend lots of money on web development and the staff required to manage this area of the business, in favour of attributing resources to the short-term challenges they currently face.

Scothern believes the technical tradesperson – builder, plumber, electrician – will adopt the new technology very quickly and suppliers will end up with that relationship because merchants won’t necessarily have the stock or expertise to sell it properly.

The next topic centred on ETIM (European Technical Information Model). Although the BMF was chosen as the sector lead organisation for developing the data standard for building materials products, the impact of Covid and the need to prioritise on bigger areas meant that the classification model is months behind where the federation wanted to be.

The main job therefore, according to Newcomb, is relaying what ETIM is and what it isn’t. The BMF now has a dedicated project manager to look after ETIM and has formed ETIM UK, in conjunction with the Electrical Distributors Association.

“It’s a brand building exercise and an explanation exercise at this point in time,” said Newcomb. “We can’t digitalise the industry unless we have a standard form of product exchange. Information is a very basic requirement of a digital economy. ETIM is absolutely critical to the success of digitalisation within this industry.”

Scothern referenced Tool Bank who has been investing in product data for 20 years and charges its customers to use that data because it sees it as an asset, while Travis Perkins puts data on its balance sheet when it reports to the Stock Market.

How you differentiate between omnichannel and multichannel because they both involve selling across multiple digital channels was next up for discussion.

Scothern offered a comprehensive response, but for Newcomb it’s all about making the process as quick and efficient for the customer so having a presence in as many channels as possible is key.

The final part of the debate centred on the rise of virtual showrooms, and whether the customer is going down a different route by not wanting to be as ‘touchy feely’ with a product as previously.

Morgan thinks this links to omnichannels again and “those people who can join all the dots up really quickly and conveniently for the end user are going to be the winners”.

“From a supplier perspective, we can already operate in an omnichannel world, in a world of speed and convenience and in a world of predicted stock requirements,” he said. “At Crystal, we like to think we are pretty agile in terms of helping merchants become more multi/ omnichannel.”

This article first appeared in the September issue of Builders’ Merchants News.