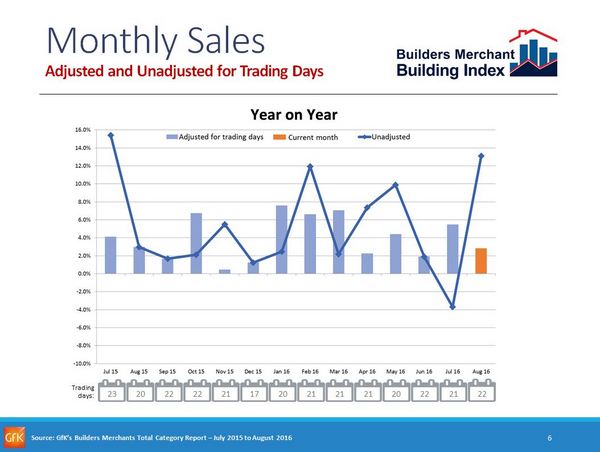 Total Builders Merchant August sales were 13.1% up on the same month in 2015, boosted by two additional trading days. Four categories did better, including Landscaping (+19.2%) and Heavy Building Materials (+14.1%), the largest category. Two categories achieved their highest sales in the last 12 months, Ironmongery (+14.0%) and Timber Sheet & Joinery Products (+11.8%), the second-largest category.

Without the two extra trading days, total sales per day in August were 2.8% up year on year.

Compared with July, August was up 2.3% helped by one additional trading day.

Total sales in the three months June to August were 1.6% higher than in March to May, although taking the three additional trading days into account, average sales per day were 3.1% lower. Timber Sheet & Joinery Products was strongest (+3.1%) and Plumbing Heating & Electrical weakest (-6.1%).

“The Roof Window market, which is included in Timber Sheet & Joinery Products, has not been affected by the EU Referendum,” comments John Duffin, MD of Keylite Roof Windows. John is BMBI’s Expert for Roof Windows. “The population is growing fast and families need more living space, so there is both pent-up and new demand for housing and the space to live in comfort. Large house builders are talking about substantial increases in 2017 build programs and beyond. A stable political scene and low interest rates should reinforce consumer confidence to borrow and buy.”

We’re surprised by the ONS construction output figures for August (-1.5%) as they don’t reflect what we see happening in the building materials industry. BMBI figures are actual sales, not estimates, and account for over 80% of the volume of the sector.

John Newcomb, Managing Director BMF commented that there is lots of speculation on the impact of Brexit on construction, but sales were up over 13% in August, and shows that our industry is in robust health.