Builders Merchants’ February sales were 1.1% down on February 2016, but average sales per day were 3.9% up when adjusted for a difference in trading days.

February sales were up 6.1% on January (+11.4% adjusting for trading days). Despite February being wetter than January, Landscaping (+23.5%) was the top performer. Kitchens & Bathrooms (+12.3%) and Heavy Building Materials (+6.5%) also outperformed total merchants. Workwear & Safetywear (-6.2%) was one of only two categories to sell less. 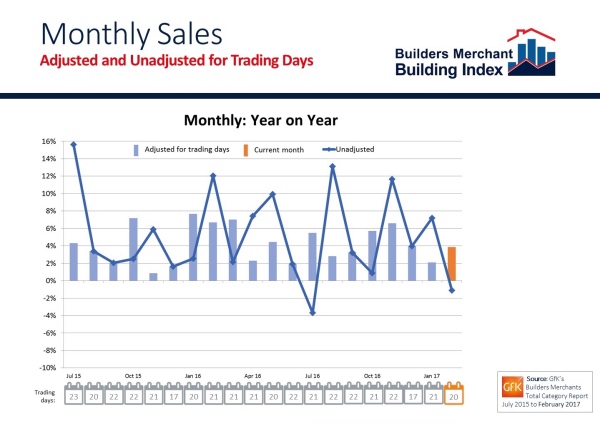 Tony France, Sales Director, Ibstock and BMBI’s Expert for Bricks (pictured), commented: “Brick industry demand has increased strongly in recent years, but increased capacity, brick manufacturers’ and major developers’ improved planning systems, and improved forecasting are ensuring customers get what they want when they need it, so there’s no requirement to panic-buy!

“It’s vital that customers assist by scheduling accurate levels of volume, rather than over-ordering unnecessarily which can lead to false order-books and extended availabilities. In the specification market, we encourage architects to submit a ‘Letter of Intent’ so the products they want can be reserved for their projects.

“RMI brick demand is not hugely affected by the severe fluctuations we’ve seen historically in new-build housing. Housebuilders and merchants are advising that more homes will be constructed in 2017 compared to 2016, and there’ll be fewer apartments/flats and more detached/semi-detached and terraced houses. That means more RMI opportunities, which in turn feeds the future growth of the brick industry.”