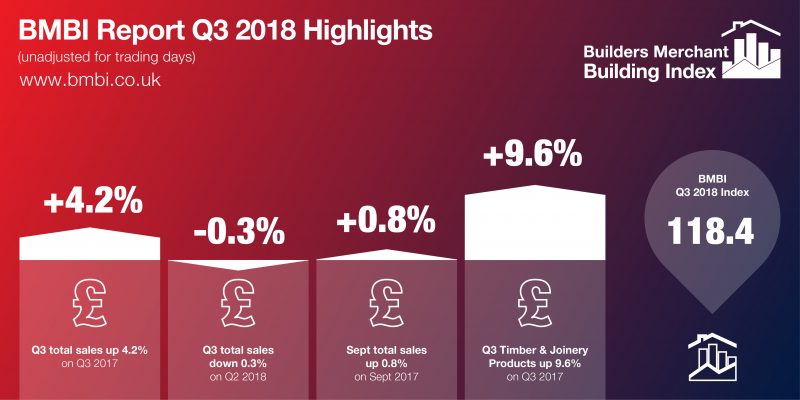 After a robust second quarter, sales through UK builders’ merchants continued to deliver value growth in Q3 2018, rising by 4.2% on the same period in 2017. July provided the strongest year-on-year growth, tailing off slightly as the quarter came to an end.

Timber and Joinery showed the highest value growth across the quarter with a year-on-year increase of 9.6%. This was driven by sheet materials and timber items such as carcassing, battens and trusses.

Quarterly sales in the Plumbing Heating and Electrical category were up by 3.4% year on year. Dig deeper and the category showed mixed results, as a positive quarter for boilers was pulled down by a negative one for Electrical and Lighting.

Heavy Building Materials, the largest category, had a slower quarter than some with sales value growth of 2.4% on Q3 2017.

The Kitchen and Bathroom and Decorating categories both grew by 2.1% year on year.

The figures are taken from the BMF’s Builders Merchants Building Index (BMBI) that contains data from GfK’s Builders Merchants Panel which analyses 80% of generalist builders’ merchants’ sales throughout Great Britain. While the data confirms a year-on-year increase in sales performance, the 2018 quarter-on-quarter comparison found that the market has slowed, with average sales a day in Q3 falling by -3.4% from Q2. However, this is not untypical in the builders’ merchants’ cycle and year to date sales for the nine months January to September 2018 were 4.0% ahead of the same period in 2017.

Commenting on the results, John Newcomb BMF CEO said:
“Builders’ merchants’ sales continue to show value growth, but there are one or two indicators within the wider market that we need to note going forward including rising costs for labour, fuel and raw materials. In addition, the merchants’ main customer base, SME builders, depend on continued consumer confidence to progress domestic RMI work. Uncertainty over Brexit is a common thread between all of these factors and, unfortunately, no one can predict what the final agreement will be.”

Richard Frankcom of GfK adds:
“Overall this is another quarter of solid value performance, but the BMBI does not consider volumes and prices. I have two questions. Have we now seen the end of the price inflationary impact from the Brexit vote? Will this flatter growth now become the norm? Personally, unless we see a significant shift in the pound, I think it might.”