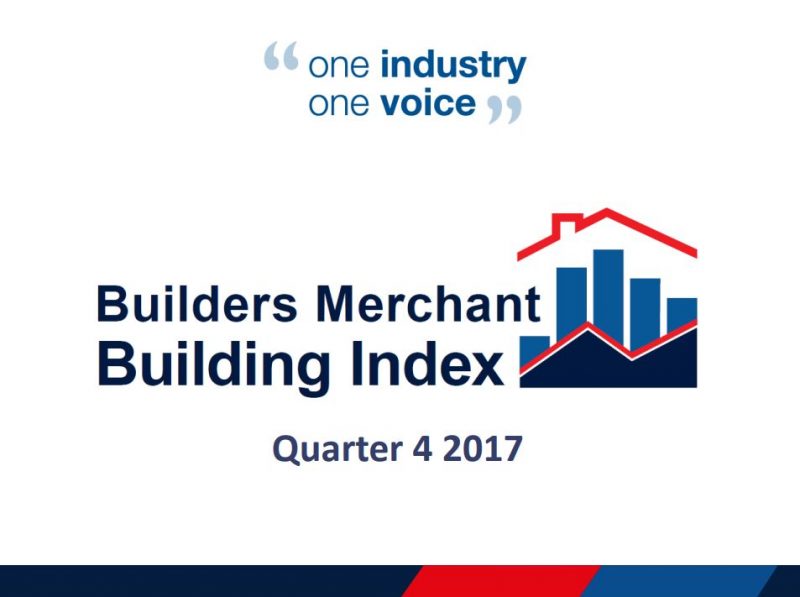 Strong fourth quarter wraps up a solid year for merchants

Another set of positive sales figures for the final Quarter of 2017 published in the Builders Merchants Building Index (BMBI) Quarter 4 report reflects the continued strength of the sector’s primary markets – private housebuilding and domestic repair, maintenance and improvement (RMI).

The BMBI uses GfK’s point of sale tracking data drawn from over 80% of generalist builders’ merchants’ sales throughout the country, making it the most reliable source of data for the sector.

Looking at Q4 in detail, total growth was supported by the two biggest value categories, Timber & Joinery (+7.3%) and Heavy Building Materials (+6.4%). A number of other product categories also assisted the strong finish, notably Plumbing, Heating & Electrical, and Tools (both up by +7.7%), Ironmongery (+7.3%) and Kitchens & Bathrooms (+6.6%).

Perhaps not surprisingly, growth in annual sales was also driven by the largest product groups, with Timber & Joinery at +5.4% and Heavy Building Materials at 5.1%.

December slowed in comparison to both Q4 and the annual totals, but an extra trading day in 2016 hides the true performance. Growth per trading day grew faster than the annual average at +5.7%. Timber & Joinery at +8.6% was a major contributor, but internally focused categories – Plumbing Heating and Electrical +10.1%, and Kitchens & Bathrooms +8.9% – performed strongly year-on-year.

“Our results have appeared out of kilter with headline figures from the ONS for some time, but if you drill down into their reports the results are comparable. The lion’s share of merchant sales is driven by the housing market.

“While private housebuilding is forging ahead, assisted by Help to Buy, and private domestic RMI work is holding up well, the same cannot be said for commercial and industrial sectors which have seen a sharp decline post Brexit. We remain optimistic for continued growth in 2018, but I’m sure merchants will be factoring in a number of outside factors – from monetary policy to Carillion’s demise – that could affect trading.”

“Builders’ merchants delivered a strong performance in 2017 during a period of political and economic uncertainty and a changing value of the pound, which compounded trading difficulties. The strength of the sectors they operate within has generated some of this growth, but price inflation has also been a contributing factor.

“There are a number of factors that could impact on trading in 2018. Initial reports have shown a weakening in new housebuilding, and there are renewed concerns over skilled worker shortages. With interest rates expected to rise sooner and faster than predicted, thereby increasing the cost of borrowing, we watch with interest to see if generalist builders’ merchants continue to defy market expectations and drive forward again in 2018.”