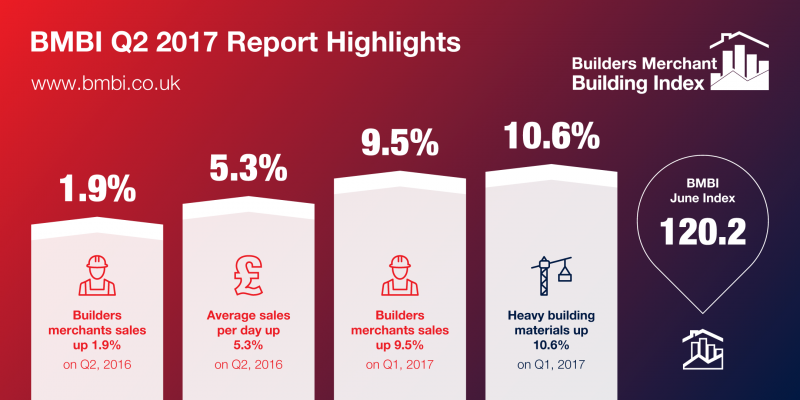 The latest data released in the BMF’s Builders Merchants Building Index (BMBI) confirms a continuing positive trend for UK builders merchants with Q2 sales increasing by 5.3% (when adjusted for there being two fewer trading days in period) compared to Q2 2016. The actual Q2 year on year sales figure (for 61 days trading compared to 63 in 2016) is still positive at +1.9%. Furthermore, year to date sales figures to June are 3.8% higher than for 2016, a period with the same number of trading days.

The majority of product areas performed well in Q2. Sales of Ironmongery (+8.4%) and Kitchens and Bathrooms (+8.3%) led the way in adjusted year on year growth for the quarter. The three largest product groups also performed well with sales of Timber & Joinery up by +6.0%, Landscaping +5.9% and Heavy Building Materials +5.6%. Sales of Plumbing, Heating and Electrical products also showed positive growth at +3.8%, although the increase was lower than the total builders merchants channel.

The BMBI tracks builders merchants actual sales using point of sale data collected by GfK that represents over 80% of the value of the builders’ merchant market. The Q2 results appear to tell a different story to the trend reported by the Office of National Statistics earlier this month, in which overall construction output fell by
-1.3% in the three months to June compared with Q1, and rose by just +0.4% on the same period last year. This may reflect the predominance of housebuilding and domestic repair, maintenance and improvement work carried out by builders merchants’ customer base.

Commenting on the results, John Newcomb, BMF CEO said: “The majority of trade indicators are finding that order books are being sustained by private housing and RMI work – the mainstay of many a merchant’s business – while commercial sectors are falling behind. Even the ONS reported a year on year increase in housing of +9.4% for the quarter.

“I have visited over 20 BMF members in recent weeks and every one reported sales growth in the first half. While they have seen little evidence of a slow down in overall sales, they are reporting more price increases, an inevitable result of the falling exchange rate, and shortages in certain product areas. The merchant sector is showing resilience at the moment, but it would be foolish not to consider the possibility of tougher trading conditions as we move into 2018.”
Richard Frankcom of GfK adds “Once again the builders merchants deliver great year-on-year sales value growth across the first six-months of 2017, coming from a variety of product categories. However, we cannot ignore the contribution that increased costs and price increases have had on this continued value growth.

“Going forward, we urge the industry to keep a close eye on trends impacting consumers’ ability to carry out renovations and improvements. Bank interest rates and real wage trends impact consumers’ ability to finance home improvements or house moves. We have just seen a significant drop in intentions to invest in home-related projects which could be felt by the merchants as early as the end of this year. However, home improvement projects could still be one of the best investments home owners and landlords can make right now. The encouragement and evidence for them to do so needs to come from somewhere during these uncertain economic times.”